The Carson City Library asks: Have you read a banned book lately?

The Carson City Library asks: Have you read a banned book lately? 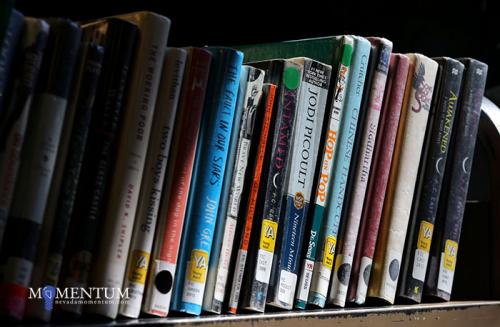 Have you read a banned book lately?

Chances are, even if it was on your high-school Literature class reading list, you have read a book that somebody somewhere wanted to ban.

Along with libraries across the country, the Carson City Library will be celebrating Banned Books Week (Sept. 22-28) with a special event to thank authors whose work has been prohibited or challenged.

Between 4:30 p.m. and 5:30 p.m. on Friday, Sept. 27, readers will gather at the Carson City Library, 900 N. Roop St., to write letters to authors to show support for writing about controversial subjects.

Registration is encouraged, and you can sign up on the library’s website (carsoncitylibrary.org) and clicking on the Calendar, or by following this link: https://carsoncitylibrary.libcal.com/event/5634768.

“It’s a way to emphasize and remind everybody of their freedom to read,” said Diane Baker, interim director at Carson City Library. “People may read whatever they’re interested in — not what has been selected by somebody else.”

If you’re skeptical that you’ve ever read a book that’s been banned — or, at least, challenged by someone who thought it was too controversial for public consumption — just check the American Library Association’s annual list of frequently challenged books at http://www.ala.org/advocacy/bbooks/frequentlychallengedbooks/top10.

You’ll see that young-adult titles often make the list, because people worry that teenagers aren’t ready to read about LGBTQ issues or confront the realities of suicide, for example.

Baker said she and other librarians in Carson City do hear requests from time to time to keep books out of the hands of their patrons.

But it’s the library’s role to provide books — not prohibit them. And if parents are concerned about their children's reading, that’s a good conversation to have at home.

“You can discuss in your family what you think is appropriate,” she said. “If you have a library card, though, you can check out a book.”

Since 1982, Banned Books Week has been highlighting attempts to censor the works of writers who take on subjects some people find offensive. The idea to write a letter of appreciation came out of the library association’s Office for Intellectual Freedom.

In Carson City, the library will help with authors’ addresses to send the letters — and even provide a stamp. Or you can draw a picture to send, as well.

Asked if she’d read a good banned book herself recently, Baker was reminded of a quote from science fiction author Isaac Asimov: "Any book worth banning, is worth reading.”

another site by CC Communications